The Maasai Market and the Art of the Hard Sell 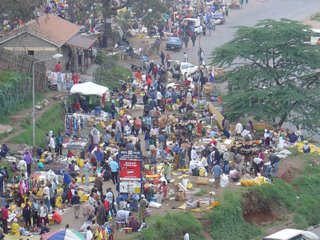 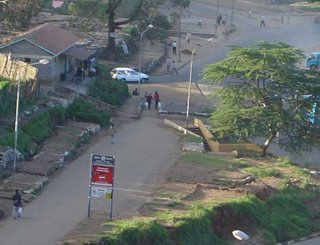 Circulating around Nairobi is he Maasai Market - a street market that moves from neighbourhood to neighbourhood. On Tuesday's it s found across the street from the Meridian Hotel where i've been staying this week. Tomorrow it will be near the Hilton Hotel and i hope to find it. I know many people will be coming to Nariobi from around the world in January for the World Social Forum and the Maasai Market will be something many will want to check out. Prepare to bargain - those of us raised in economies where virtually all prices are fixed might want to bone up on some principles of haggling. Not that i have any particular skill. The market is crowded, noisy, fascinating. There are numerous vendors and at least as many brokers - men who spot likely customers and are remarkably aggressive about selling you things. Its all pretty good natured. But it is also overwhelming. At one point i had at least five guys competing simultaneously for my attention, each pushing various goods in my arms and face. If you're white then you stand out pretty obviously as a mark for everyone's attention. I'm not sure how the brokers work, though i imagine they "represent" vendors and get a cut. But it's clearly pretty fast and loose. One fellow tried to persuade me that the young Maasai woman from whom i wanted to buy a necklace was his sister. I thought it unlikely and wished deeply that i spoke ki-Swahili so i could understand what looked, from the body language, to be a fascinating negotiation in which the broker was trying to convince the young vendor that he could get los of money out of me. The young woman was beautifully tough and clearly not giving the fellow an inch. So, to those of you coming to Nairobi in January, best of luck at he Maasai Market. The above-images are the street the day before the market and the morning of.
Posted by Chris cavanagh at 1:57 am