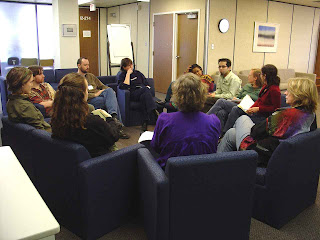 I started this blog three years ago partly as a way to redirect my disappointment over a failed attempt to launch a national Activist School (aka Democracy School) across Canada. The Catalyst Centre along with a wonderful array of allies developed what i still think is a beautiful vision. And we came within a hair's breadth of having the start-up funds to launch something that i still think we desperately need. You can read our original vision here. You can even have a look at our business plan here (caution, it's a 2.7M PDF). Sadly, the idea proved too radical for the funder who had had some interest. We came up against a charateristic neo-liberal (aka neo-conservative) plaint that goes something like this: "will there be equal room at this Democracy School for someone with conservative politics?"

While our effort was definitely aimed at creating more space for social justice activism, it was equally committed to this being a democratic space and on that basis, the answer to the
neo-con objection would be "yes". But, of course, the naively worded question above disguises (and mis-directs) the true intent behind the question which is merely to bolster the dominant common sense that there is a basic equality between such things as the Left and Right, i.e. there are always two sides to an issue, etc. Nonsense, of course. Though it's true that there are two sides to an issue (in a Manichaean, good-vs-evil kinda way), it's more true that there are numerous sides or, still more true, facets. The dominating consciousness is always quick to demand "equal time" when challenged, though it rarely feels the need to offer the same when advocating its own positions.

At any rate, the Activist School proved too challenging an idea to access the necessary funds for us to get started. And i'll grant that we were applying an important ethic that made things especially difficult funding-wise. While we pulled together a remarkably diverse coalition of interests to get the things rolling, we were also intent on having enough resources at the beginning of the process to enable us properly to involve voices traditionally excluded until the party gets started. We dared to imagine that, just this once, we could establish a "ground floor" that would include the voices of our society's most marginalized and oppressed. Our ethic was one of democratic co-creation. We eschewed Margaret Mead's over-quoted "common sense": "Never doubt that a small group of thoughtful, committed citizens can change the world. Indeed, it's the only thing that ever has." While these words have been used to mobilize people to get active with their neighbours and fellow citizens, they also promote the notion that mass movements don't "change the world" and/or, if they do, it is actually because of a small, elite group that can be found at a movement's core. Not to suggest that you won't find a small group at the core of such things. But it is a gross oversimplification of the complexities of social change to suggest, as Mead does, that a small group is "the only thing that ever has" changed the world. Contrast this with the Gandhian notion of sarvodaya which Gandhi coined and used as the title of his political philosophy. From two sanskrit roots sarva (all) and udaya (uplift) it translates as "the uplift of all" or "the welfare of all." I came across this term 20 years ago reading the work of Vinoba Bhave, spiritual successor to Gandhi and founder of the Sarvodaya Movement. In some article i read sarvodaya was translated as "all rising together" and that idea has stuck with me since. The more i learn about how the welfare of the privileged few necessitates the impoverishment of the many, the more i return to this gandhian notion. I imagined that our approach to the Activist School modeled some small part of this notion of radical mutuality.

Well, as i said, we failed to establish an Activist School. But for three years we shared resources, developed new relationships, and dreamed together about a better world. And i, for one, have continued to think about a national activist school that could combine the virtually countless on-going social change efforts in something slightly more cooperative and coordinated. All this to say that i've come across a number of institutions where there is space for activist education. So, if you're looking for a space where you can focus your learning about social change, a place to engage theory and practice, a place to develop new relationships, and even a place where you can learn more about popular education, here's a few i know about:

The Faculty of Environmental Studies at York University in Toronto, Ontario, C anada: FES has Bachelors, Masters and PhD programs. The MES, in particular, is an excellent place for activist education. The MES is a self-directed study program. Students make their own curriculum and, as such, have the unusual (for academia) freedom to craft a unique course of study. Many environmental activists have come to FES to hone their skills, explore theories of change and learning, learn how to influence public policy and more. I'm pleased to have taught the Popular Education for Social Change course since 2001 (excluding 2003) which is an excellent activist learning opportunity. And there are numerous other courses including about social movements and community organizing that are well-worth taking.

The Environmental Advocacy and Organizing Program at Antioch University New England, U.S.A.: this is a relatively new program, developed by Steve Chase as part of his PhD work. Steve included researching popular education into his PhD and he has subsequently incorporated it into the curriculum and pedagogy of the EAOP. I don't know the US academic landscape well enough to know if the EAOP is unique, but it sures looks it. Steven Chase also maintains a related blog that's worth checking out: The Well-Trained Activist.

MA/Diploma in Activism and Social Change in the School of Geography, faculty of Environment at the University of Leeds, England: I just learned about this program from a friend (thanks, Katharine) and i love the name. They offer an MA, Diploma and Certificate program. i've yet to look more closely at this program, but, at a glance, it looks great! Very interestingly, they are using Do It Yourself: A Handbook for Changing Our World by the Trapese Collective, a popular education collective that includes Kim Bryan, Alice Cutler and Paul Chatterton who is the Course Coordinator for this program. I plan to write about this book in a subsequent post.

CAW/MAC Certificate in Labour Studies at McMaster University, Hamilton, Ontario, Canada: i learned about this program through work i've done for the Canadian Auto Workers. What i've learned of the program is that it includes an emphasis on supporting union activism. Their description includes this paragraph that seems a good example of popular education practice:

Courses are offered locally in your community. Education has an important role in building a knowledgeable membership and workplace leadership. An educational program will develop members capacities for critical thinking. The learning process built upon a commitment to participants that translates into respect for prior experience, skill and activism.

(The image above is of one of the many meetings that happened over the three years of our effort. It was taken by Dorothy Wigmore.)
Posted by Chris cavanagh at 9:40 am