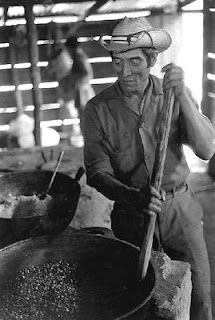 In 1984 and 85 i spent a good deal of time in Nicaragua where i learned spanish, volunteered on farms (planting potatoes and talking about Salvadoran guerilla's need for very good watches), taking thousands of photos and cutting coffee, amongst other things. This photo of Umberto, one of the worker-owners of the coffee farm where i worked for a few weeks, is one of many i hope to scan and share in the coming year. Having injured my leg one day, i hung back from the coffee fields and spent the day helping Umberto roast coffee for us cortadoros. Sadly, the coffee was wretched. But it was flaboured uniquely with the very fresh fruit of our labours. I can taste it still. My visits to Nicaragua are now over 20 years in my past and yet they remain vivid in my heart and inspire me still. When the revolution succumbed in 1990 to US aggression, i was deeply saddened and have carried that complicated sadness within me since. The complicated emotions, perhaps not surprisingly, included anger. I had risked my life to make some small contribution to the revolution. And i'll never forget being shot at by contras packing US-supplied M16s. Though terrified while under fire, the emotion that has lasted is profound anger (tinged with indignation - I recall standing, the morning after the first attack, over the site from where the contras had been shooting. The spent M16 shell casings lay all about and i gathered a few up - strange mementos.)

This anger was refreshed as i listened to Harold Pinter's 2005 Nobel Prize for Literature acceptance speech which Democracy Now featured this week on the occasion of Pinter's death this past christmas eve. Pinter spoke of Nicaragua:

The Sandinistas weren’t perfect. They possessed their fair share of arrogance, and their political philosophy contained a number of contradictory elements. But they were intelligent, rational and civilized. They set out to establish a stable, decent, pluralistic society. The death penalty was abolished. Hundreds of thousands of poverty-stricken peasants were brought back from the dead. Over 100,000 families were given title to land. 2,000 schools were built. A quite remarkable literacy campaign reduced illiteracy in the country to less than one-seventh. Free education was established and a free health service. Infant mortality was reduced by a third. Polio was eradicated.

Pinter also includes in his speech an excerpt from a Pablo Neruda poem that has held profound meaning for me for almost thirty years. In this stanza we see Neruda's genius in knowing that there can be no poetic embellishment that is more meaningful than the heartbreakingly simple decription of the last line:

I know i will listen to and reread this speech several times in the coming weeks. I need the reminder of the truths of which Pinter speaks. It cracks my heart open once again. It has always struck me as an irony of the human heart that broken-hearted is the only way one can live - for it is through the cracks that we let in truth and love and through which our compassion can flow.