Inspiring Words - Fiction and not

Reminded recently of Charlie Chaplin's speech in The Great Dictator (which i wrote about on FB) i have been noting several moving speeches of resistance against oppression which i have read/heard/seen over the years. I want to believe that such language is the powerful and persuasive "speaking truth to power" that Quakers speak of. I am certainly persuaded by them.

I saw the Great Dictator many year's ago and filed away the memory. Now i am struck by how much of what Chaplin says accords with how i see the world. Not so much his appeal to "science and progress," but his talk of kindness, care and love strikes deep into my heart. When he says, "Only the unloved hate," i was powerfully reminded of Alice Miller’s words (from Thou Shalt Not Be Aware):


Children who are respected learn respect. Children who are cared for learn to care for those weaker than themselves. Children who are loved for what they are cannot learn intolerance. In an environment such as this they will develop their own ideals, which can be nothing other than humane, since they grow out of the experience of love.

These words and all of Alice Miller's work have had a huge impact on me. This short quote is a kind of manifesto to me - one that i both hear and see echoed in Chaplin's speech. The tone of fearful desperation that he strikes, the weary urgency that you see in his hand dragging through his hair as the speech begins all makes me wonder just how much he was acting. His appeal to soldiers not to "give [them]selves to brutes," is an appeal to all children who, being twisted out of shape by violence and neglect, must choose either to resist or collude. The constraint on these choices from the brutality of our society that creates the conditions for such violence and neglect (with the inexorable and heartbreaking pattern of abused children becoming adults who, in turn, abuse children) is immense. I am reading In the Realm of Hungry Ghosts 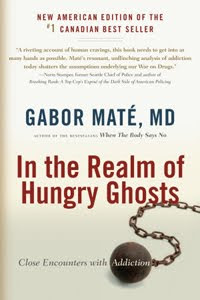 by Gabor Maté which is challenging my understandings of family violence, attention deficit disorder and addictions. And i thought i knew a great deal. I've certainly been very mindful and sensitive about such things for a long time and i have educated myself constantly. And yet, as i read Maté's work i realize two things: i am more ignorant than i thought; and i, like most people, find it easier not to think about such things - to turn away from the hand raised in need and not ask the questions that are always present, if implicit. Now, in reading Maté's work i find it impossible not to think of the people he describes, people living with addictions, as once having been innocent children who wanted nothing else but to be held, loved, cared for and yet who were neglected, assaulted, abused. Their souls having been shattered, they grow to be adults with shattered souls who, failing to ameliorate that destruction by "acceptable" means (i.e. relatively "acceptable" behaviours like workaholism, compulsive shopping or gambling) turn to even more self-destructive behaviours of any one of several chemical dependencies. And yet, as Maté shows again and again, alongside the self-destructive behaviour there still exists kindness, longing, decency. I feel if we don't pay attention to the poorest, most oppressed in our society the more surely we will bring into existence a world of carelessness and disregard. We either learn to act with kindness or we will see more and more of the contempt that our current government has for the mass of Canadians (something echoed around the world) as those with the most share of earthly wealth seek to ensure that they keep what they have even while their fellow humans suffer. Is it a wonder that there seems a proliferation of post-apocalyptic literature, film and television? I see in this a tricky message of both despair and warning. We worry about apocalypse (from alien invasion, geological/climactic disaster, disease, zombies & vampires, asteroids) almost as if we have a desire for such things. Perhaps it is the same grim behaviour as rubber-necking for traffic accidents. But there is also warning as well. And i wonder if the popularity of such apocalypticism doesn't include a warning to the world's ruling classes: share or else. And thus i am reminded of another (fictive) speech - that of the character V in V for for Vendetta. A post-apocalyptic call to action that should perhaps be heeded even now.

Finally, another speech i am reminded of (and it is no fiction) is that of Salvador Allende prior to his death in the American-backed coup in Chile on that other fateful September 11 date:  Salvador Allende's last speech (english translation). You can listen to it with this video.  It is an appeal to resist oppression like few i have ever heard.