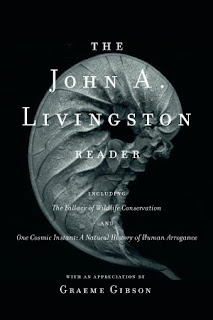 I feel both lucky and privileged to have been able to study with and learn from John Livingston. He was in his last years of teaching when i was a student in the Faculty of Environmental Studies. And we hit it off quickly. I'm not sure why. He had a somewhat fierce demeanor - of the "not suffer fools gladly" type. But i know that i instantly appreciated and loved his passion and clarity of feeling about the problematic relationship between the human built world and the natural world. His work challenged the common sense about environmentalism in ways that i feel we (both society at large and the environmental movement specifically) have yet to embrace.

An article in this week's Toronto Star by a graduate of FES is aptly titles The Greatest Environmentalist You've Never Heard Of. Louise Fabiani writes:

While Livingston was no Luddite – he benefited from hi-tech medicine and central heating as much as the next person – he hated the human sense of entitlement that enables us to perform the most unspeakable acts of cruelty and waste. Sport hunting, vivisection and habitat destruction filled him with a despair that dogged him for most of his life.

But despair is not nearly as sustainable (or, sad to say, acceptable) as rage – not for the average male, anyway. Initially, I joined many fellow students in tiptoeing around John's temper. His oratory style alternated between measured and combative. He snapped at unsupportable statements. He interrupted himself in mid-lecture to sputter indignation at some memory that assaulted him out of nowhere. He did not suffer fools gladly – though, to listen to him, fools got whatever they deserved.

I recommend John's writing as essential reading for all those of us who would fancy calling ourselves environmentalists. Check out The John Livingston Reader. Worth it.
Posted by Chris cavanagh at 9:51 am

Sorry but I do not know your name but keep up the good work!

I'm glad you like my meandering bloggy thoughts. My name is chris cavanagh which i'd forgotten is not anywhere on my blog.

I think we met briefly at FES in the early 90s. And before that, at McGill in the 80s. Small (eco) world.

Thanks for quoting my article. I needed a little shot in the arm today and that more or less did the trick!
Greenly yours,
Louise
(I'm in Montreal again now; if I had a web page, I'd send it, so you could write back)

i'm glad you found this post. I do recall meeting while at FES. Though my McGill years are foggier.

That's nice that you're in Montreal. I miss it. The 80s in Montreal were good years.

Feel free to email me at mythcast (at ) gmail.com