Spring again, and again and again 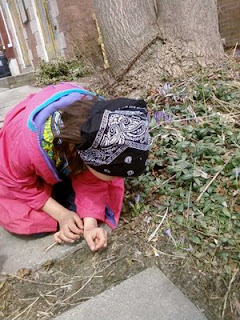 I think it's the most magical corner in the neighbourhood. Every spring the crocuses have exploded on this corner in wondrous abundance. My daughter and i were out for a walk this Saturday past (the second day of Spring) and we took a detour to see how the crocuses were doing. Only a few had opened and most were probably waiting for today's glorious sun. Year after year the crocuses return, as do so many other green things. And even while i am mindful of the disastrous species loss that human civilization continues to accelerate 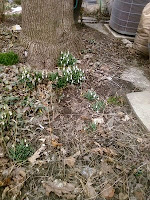 (called the Holocene Extinction Event, by some), i am still deeply moved by the annual cycles which persist. I love whichever season i happen to be in - each is attended by unique emotions, unique spiritual states. And now it is the beginning of the flowering of the world. Life leaping from its wintry slumber and i think that humans for hundreds of thousands of years have been witnessing this annual return, this yearly growth and blossoming and we have crafted countless tales of death, dying and return. And here we are once again, in this northern latitude and here are the so so dependable crocuses and snowdrops and the shy green shoots of hyacinths, daffodils and tulips. Happy Spring! May it ever fill our hearts with hope and courage. For the times that lie before us are fraught. And we will need the annually new green and the stories, too.
Posted by Chris cavanagh at 6:47 pm

Thank you my friend for putting my life into perspective. I needed the reminder to love the season (place) my life is now.

And here in the Southern Hemisphere simultaneously the dark creeps back and night comes in early. The European trees gently doff their growth and take a stance of quiet resting. The Eucalypts facing all seasons with the same calm. This year I stand with them finding myself awaiting the dark and the cold, longing for its inwardness, humility and its embrace of death-for-rebirthing. Your crocusses remind me that this night season will flow on and through me and I must be in the Nowness of it, before it too is gone. Niki x