There Must Be Some Kind Of Way Out Of Here 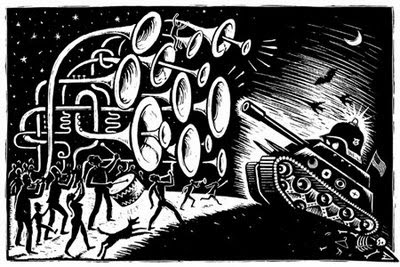 There is an excellent forum on socialism on The Nation website that starts with a piece called Rising to the Occasion by Barbara Ehrenreich and Bill Fletcher, Jr. and which includes provocative commentary from Tariq Ali, Mike Davis, Rebecca Solnit and others. There's also additional response from Michael Albert of Znet here. It's good reading. And yet my feeling is one of frustration. For it's the same good thinking that's been around for as long as anyone has cared to look for it. I've never been comfortable calling myself a socialist or an "ist" of any kind for that matter. It is perhaps ironic that my life has been devoted both to social change and an ethic of collective/cooperative struggle and yet i've never been much of a joiner - at least when it comes to being a member of a political party or tendency or whathaveyou. Perhaps it's all that research i did on cults and mass therapies back in the early 80s (or maybe it's just my homage to Groucho Marx who helped me survive my teen years and who once wrote, "I don't want to belong to any club that will accept people like me as a member.") At any rate, though i've never worn that label, socialism is yet the source of much of my understanding of economics and social change. And it's the regime of knowledge for which i have the greatest affinity.

So there is little if anything new in this Nation exchange and Michael Albert's dandy list. The ideas they share, the anger and passion, is all familiar to me. And it's good stuff. You should read it. But something has always been missing for me. For a long time i thought it was the participatory aspect to it all. And learning about popular education, developing popular economics curriculum (including some pretty cool techniques like jobology) certainly lead me closer to what i felt was missing. But all the popular economics stuff still seemed to reduce (or perhaps overpower?) things to economic determinism - i.e. what is most fundamentally true about our world is the economic logic upon which all else (politics, governance, social life, even art) is organized. It is only in coming across the emerging field of praxis called "diverse economies" that i feel i have finally found the missing piece. Based on the work of J.K. Gibson-Graham, diverse economies both de-centres and denaturalizes capitalism. It is, in a word, anti-capitalo-centric. Which is a good part of their critique of traditional left (i.e. marxist) analysis of capitalism. Diverse economies provides a means by which we can avoid the inevitability of framing other economic choices as "alternatives" which, though we may not say it, always implies "alternatives to capitalism" - a way we always subtly reproduce a centre/periphery metaphor with capitalism, obviously, as the centre and whatever choice we are advocating as the periphery or margin, as it were. Diverse economies theorizes the terrain of economic choices as one that is diverse and in which capitalism becomes one choice, albeit a dominant one, amongst many. Now, instead of talking about "alternatives" we can talk about different choices. I think that's an improvement. Likewise, even while diverse economies is, for the most part, anti-capitalist it yet allows us to imagine a set of diverse economic relations that could include capitalism. And, perhaps, should.

Doug Henwood, in his contribution to the Nation Forum, makes a point for which i have much sympathy:

I also want to dissent from another prescription: Rebecca Solnit's contention that the revolution is already happening, via "gardens and childcare co-ops and bicycle lanes and farmers' markets and countless ways of doing things differently and better." While many of these things are very nice, they're well short of a transformative vision. The package draws heavily on an ancient American fantasy of self-reliance and back-to-the land escapism. It's no model for running a complex industrial society. Such a system couldn't make computers or locomotives, and it probably couldn't feed 6 billion earthlings either.

While he's a little pessimistic and unkind about other approaches, i share his concern that billions of us are bound up in the system as it is. And even minor disruptions mean the loss of many lives and the worsening of many more. Too often i feel that socialist choices (of theory, pedagogy, organizing and economics) is yet overly reliant on the positivist notion that if only we can get the right information, the perfect information, the perfect program, the perfect approach into people's heads, then that truth will set them free and we'll have made it to the gates of paradise. And, for sure, socialism has, since it's beginnings, had utopian aspirations. And that speaks to my science-fiction/fantasy lifelong love-affair. But of utopias i feel similarly as i do about joining clubs. Whatever future we aresuccessful building will not be one that those of us who bulid it will be able to live in comfortably. We are not unlike the hero of V for Vendetta who necessarily, in a literary sense, must die. There is no place for him in the world that he has midwifed. An so i wonder about the worlds we would bring into existence and if we would be people for whom those worlds would feel like home.

Again, it is diverse economies that gives me hope. For it includes in its praxis the necessity for ethical self-transformation - an elegant foucauldian phrase for the type of personal/social change which is the goal of feminism, anti-racism, anti-colonialism and all the other resistant post-structural praxes that are altering the common sense even as we speak. This is what i am looking for in the contemporary discourses of socialism, popular education, popular economics, social justice. Not simply better participatory processes (which are a must), but a profoundly anti-authoritarian and humble commitment to making theory in the midst of life, exercising strategies and tactics which allow for doubt, learning and the personal and collective reinvention of our selves and our world. This is what diverse economies is theorizing. You can check out the Community Economies website for some excellent reading on more of this.
Posted by Chris cavanagh at 4:01 pm

John Steinsvold said...
This comment has been removed by a blog administrator.
10:20 pm