Bayou - A webcomic after my soul 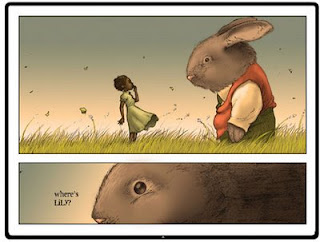 Bayou by Jeremy Love (ZudaComics/DC) is gorgeous. I've glanced at webcomics over the past few years and i've been amused and even delighted by some - particularly Scott McLoud's brilliant work. But i can't say as i have been wow'ed by any and my loyalty to the crisp, new still-got-the-smell-of-fresh-ink comic book has remained strong and intact. Now i am wow-ed. i noticed a print edition of Volume 1 of Bayou a few weeks ago in my local comic book emporium, The Beguiling, and i was sorely tempted to grab it immediately and, save for my weekly take (which had maxed my budget), i would have. A friend, knowing of my passion for comics, e-mailed me the link to ZudaComics (about which i knew nothing - thanks, Matt), and i was sold. Nor am i worried about my passion for the printed comic being diminished in any way.

Bayou is a comic that shines with light which, in the case of the on-line version, is literally true. The artwork, filled with earthtones of brown and mauve, sunset spectrums of orange and pink and fading yellows, is delicious. The style of drawing is a cross of bluthian cartoon with a dash of Walt Kelly's Pogo, and includes beautiful attention to facial expression. (It's somewhere in the realistic-cartoon zone of Scott McCloud's Big Triangle typology.) The elegance of the drawing is an excellent contrast with the horror and monstrosity that pervades this story - both the horror of racism of the early-20th Century American South and the horror of the fictional monsters who populate this tale.

The story is layered (or perhaps 'refracted' is a better descriptor) with the history of racist discrimination against former slaves, references to the African American folklore (Jeremy Love mentions being inspired, albeit problematically, by Disney's Song of the South and Joel Chandler Harris' Uncle Remus Tales) and to comic book heroes such as Swamp Thing (a misunderstood monster who is, in fact, a champion). Bayou certainly shares some qualities in common with Swamp Thing. The story, however, is incomplete (with 225 pages on-line as of today) so it is to be seen what kind of champion Bayou proves to be. Lee Wagstaff, the young female protagonist, however, is a heroine with much good literary company: Mollie Whuppie, Buffy, Sarah Crewe, et al.

As i implied, i'm hooked. This webcomic is both an excellent on-line comic and a great story. I anxiously await further installments.
Posted by Chris cavanagh at 3:27 pm