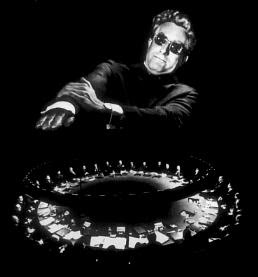 Now that i am a father of a soon-to-be 10-month-old (as well as a step-father these past two years to a teenager and an 8-year-old) i find that all that i do, read, see, and know gets immediately evaluated for its relevance to the kids. Ahhh, parenting.

My thoughts this week have turned to the teaching and learning of the young. Robert Strange McNamara's death has evoked an outpouring of renewed anger at the role he played in sending tens of thousands to their deaths as well as the murder of millions of Vietnamese (during the US's still-"undeclared" war). Joseph L. Galloway of McClatchy Newspapers wrote this scathing commentary that has drawn much fire (and i recommend reading the comments which moved me with the intensity of the hurt and anger that persists so many years later). Galloway's pithy assessment of McNamara is a cautionary note to us all: "McNamara was the original bean-counter — a man who knew the cost of everything but the worth of nothing."

It was Howard Zinn's words in this Democracy Now piece that pushed me to think about what we are teaching our children:

Well, assessing the legacy … It seems to me one things which we should be thinking about, is that McNamara represented all of those superficial qualities of brightness and intelligence and education that are so revered in our culture. This whole idea that you judge young kids today on the basis of what their test scores are, how smart they are, how much information they can digest, how much they can give back to you and remember. That’s what MacNamara was good at. He was bright and he was smart, but he had no moral intelligence. What strikes me as one of the many things we can learn from this McNamara experience is that we’ve got to stop revering these superficial qualities of brightness and smartness, and bring up a generation which thinks in moral terms, which has moral intelligence, and which asks questions not, “Do we win or do we lose?” Asks questions, " Is this right? Is it wrong?" And McNamara never asked that question. Even when he was leaving, even when he decided he had to leave the post of Secretary of Defense, even when he left, his leaving was not based on the fact that the war was wrong. His leaving was based on the fact, well, we weren’t going to win.

Looking at and assessing report cards is a relatively new thing for me. Grading, in particular, is something i've managed to avoid since i was in highschool. But i have had to grade almost 500 undergrads this past season. And i find myself looking at our kids' report cards for some insight into exactly what they are learning. It's easy to understand the marks for math and science and such. But what of their moral intelligence? It seems to me that our institutionalized mass education system still privileges those "superficial qualities of brightness and intelligence" that Zinn points out McNamara had in abundance. And i think of Hannah Arendt's assessment of Eichmann (Nazi 'architect' and manager of the Holocaust) in Eichmann in Jerusalem: A Report on the Banality of Evil - perhaps not as highly educated as McNamara, but arguably a "normal" person (according to many psychologists who assessed him) Eichmann proved capable of horrifying war crimes. Nor did McNamara's education and greater intelligence (according to Arendt, Eichmann was not that intelligent) stop him from committing war crimes.

So i wonder about our expectations for our children when it comes to excelling in school. And just where and how are we teaching them moral intelligence, as Zinn suggests is so important? I've plucked Robert Coles' The Moral Life of Children (Houghton Mifflin, 1986) off my bookshelf for a re-read (a couple of good summaries of Coles' work can be found here and here). Coles has been a great inspiration to me over the years (not least because he's simply a wonderful writer). He talks about his work with Ruby Bridges, a young black girl who, when school desegregation laws were implemented in her town in Louisiana, famously attended class alone for many months as the parents of white children refused to let their children attend school with a black child. Ruby was six. Coles wrote:

Why not, too, think of the child as moral protagonist or antagonist - as in the South's racial conflict? Ruby, at ten, looked back at four years of somewhat unusual school attendance. A black child, she walked past hostile mobs at age six to enter a once all-white school in New Orleans... Her view of her experience? "I knew I was just Ruby," she told me once, in retrospect - "just Ruby trying to go to school, and worrying that I couldn't be helping my momma with the kids younger than me, like I did on the weekends and in the summer. But I guess I also knew I was the Ruby who had to do it - go into that school and stay there, no matter what those people said, standing outside. And besides, the minister reminded me that God chooses us to do His will, and so I had to be His Ruby, if that's what He wanted. And then that white lady wrote and told me she was going to stop shouting at me, because she decided I wasn't bad, even if integration was bad, then my momma said I'd become 'her Ruby', that lady's, just as she said in her letter, and I was glad; and I was glad I got all the nice letters from people who said I was standing up for them, and I was walking for them, and they were thinking of me, and they were with me, and I was their Ruby, too, they said." (p. 9)

It's easy to romanticize kids and their capacity for a seemingly "natural" wisdom. But Coles makes the point well that context and environment are as significant as whatever psychological capacity a person might have. Not that it is the context alone. But rather a perhaps more mysterious alchemy of personality, environment, family, etc. Zinn drives home this point about environment when he says:

Yes. Listening to Jonathan Schell and Marilyn Young about McNamara’s, well, his anguish and all of that, I understand what Jonathan is saying about the fact that you can’t find anybody in the Vietnam War or in other words, anybody at that level who is going to do anything in dissent, who is going to speak out. So, what does that tell us? I mean it’s true, it’s absolutely true. But what does that tell us?

A sobering warning. And i wonder how any of us would do in such circumstances. The still-controversial Milgram and Stanford prison experiments, for all their contradictions, still present us with humbling challenges to our self-conception.

I am interested in the links between popular education (which i consider a profoundly moral pedagogy) and child-rearing and childrens education. I can't help but feel that mostly we are doing things profoundly wrong. Already, at the age of 8, our daughter has developed a dislike for school and many of its ways (even while she loves the time she gets to spend with her friends). I hate how we teach our children to fear and loathe learning. And i suspect that this loathing that we are so good at passing on is instrumental in creating characteristic opinions of incapacity, e.g. "I don't know how to draw", "I can't sing", "I'm not a good writer." It doesn't have to be this way.

So, to conclude these meandering thoughts, a story and a quote from the abundance of jewish wisdom:

Once, the great Hassidic rabbi, Zusya of Anipoli, with tears in his eyes and fear in his voice, spoke to his followers: "last night i had a fearsome dream in which I learned the question that I will be asked about my life after i am dead. "

"I stood before God and said, "I tried all my life to be like Moses who led our people from slavery? I have sought to exercise wisdom and share learning as Solomon did? I have always sought to be faithful as Abraham was."

His followers asked, “What will you be asked?”

He answered, with a trembling voice, "I will be asked, ‘Why were you not Zusya?’”