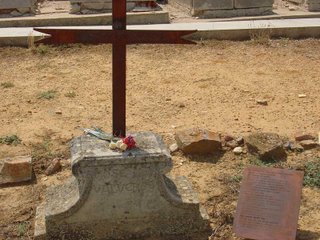 José Maria Valverde was one of Spain’s great poets of the 20th Century. He wrote about literature, taught philosophy and did the definitive Spanish translation of James Joyce’s Ulysses. He also translated all the works of Shakespeare and Rilke, the New Testament, Goethe, and more. Yup, all of ‘em. He and his family lived in exile while Franco was in power and they returned to Spain after Franco died. He is also the father of my friend Clara whom I am currently visiting. José Maria died 10 years ago and Clara and her husband Angel interred his ashes in the local cemetery of Angel’s family village of Hinojosa del Campo. Angel and Clara have fashioned a plaque that now adorns the gravesite that has on it a poem Jose Maria wrote when he was a teenager. Some years ago Clara sent me the following story in which the Brazilian educator Paulo Freire met Jose Maria:

They are both dead now.

But before they left, the two frail-looking men met. “Teacher,” “philosopher,”
“liberation theology intellectual,” “communist,” “theoretician,” “writer” and
“wise man.” They both carried the same labels without letting them get to their
white-haired heads.

Paulo requested a meeting while visiting Barcelona and his entourage arranged for it. It was to be a breakfast meeting. The living room was packed with expectation: family members and admirers wishing to witness the meeting of the two Old Masters.

Freire walked in, wearing his sailor’s hat, quiet, timid. They smiled, shook hands and exchanged brief words in Spanish and “Portunhol.” They sat, each sinking their bony bodies into their armchairs and they grinned at each other like children, recognizing each other, not needing to utter any of the many sentences written in their long list of published books.

They were pleased, comfortable, sharing a few observations about the world, exchanging a couple of jokes, silences, complicity.

The entourage watched, some still expecting the “The Truth” would be uttered, some knowing that it already had.

Paulo left. He left me two things: his sailor hat and his words in a book: “To Clara, with so much clarity...”

Posted by Chris cavanagh at 7:20 am