Numancia – The Best Offence is a Defence 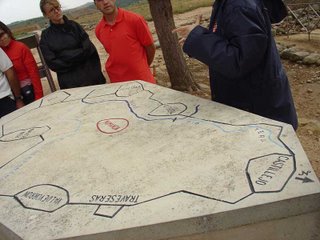 This archaeological site tells the story of a pre-Roman Celtiberian people who once thrived in this land. Celtic control once covered Europe and there remains but little of a once vast people – now found in , , , and – with a modern offshoot in . The story of this site is one that is beloved of the people of Soria. The Numancians resisted Roman conquest for 20 years. They waged a resistance struggle centred in this amazing fortified hill town for two decades before the greatest Roman general of the age, Scipio Africanus was dispatched to deal with this intractable enemy of Rome. Scipio had Numancia surrounded by seven roman camps, none more than a kilometre away. A wall connected all seven Roman camps. As effective a blockade as that seemed it was yet eleven months before the Numancians were defeated. But the way that the story survives, it would seem that, like the Alamo in the , the Spartans at Thermopylae and Julio Buitrago in , the Numancians won the day.

Posted by Chris cavanagh at 5:56 am