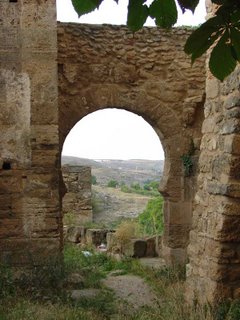 As much as I am aware that indigenous people have lived in the for millennia, I still feel in European cities something of the age of this place that I rarely feel in . Here in Agreda (where we came to buy some propane) I am moved by the am moved by the antiquity of the buildings and streets. And of the weight of the storied past that still lives in the stones of this place. This city was a place where three cultures (Muslim, Christian and Jewish) co-existed (if uneasily and if a little idealized and mythologized today) for many generations. Muslims lived and ruled in for many Centuries before they were finally defeated and expelled by Christians by 8th century. I was impressed by Ridley Scott’s vision of in Kingdom of Heaven as a place where Christian and Muslim and Jew could worship side-by-side. And I wonder if there were moments elsewhere in history (as perhaps here in Agreda) where that peaceful idea was realized – if only for a moment. I am saddened and angered – as I’m sure many of you are – with the escalating conflict between and . I despair of ever seeing it end in peace that isn’t the peace of the “desert” as John Prebble concludes in his history of the battle of Culloden. I understand much about the politics and history for control of various pieces of land. But a part of me refuses to understand what cannot be “understood” of the greed and short-sightedness of human beings for it is something fundamentally irrational. And can there be a rational explanation for the irrational? I am unsure.

Posted by Chris cavanagh at 7:17 am