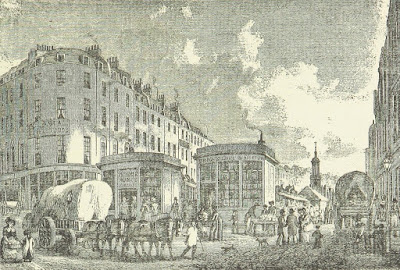 Once there was a pickpocket who lived in a small town in the north of England. He picked pockets day and night and became quite good at his chosen profession. Before long he had picked every pocket there was to pick in that small town and decided that it was time he saw what  the big city of London had to offer. Off he went and, sure enough, London was everything he’d hoped it would be: hundreds of thousands of pockets, everywhere, all the time. He made good use of his talent, if you could call it good. Before long he knew that he was the best pickpocket in London. There was no one to match his skill. Or so he thought. One day, making his way through the market he was shocked to discover that someone had picked his pocket. He never imagined that such a thing was possible. He looked around and, indeed, spotted a head bobbing away and weaving through the crowd in a suspicious manner. He gave chase, quickly caught and tackled the thief who, as it turned out, was a woman. For a moment, the pickpocket forgot that he had been robbed. Well, they fell in love and, together picked pockets all over London. They married and soon spoke of having a child. They realized that since they were probably the best thieves in London (if not the world) that their child might very well be the best thief in the world. They conceived and were very excited as, nine months later, the happy day approached. But, as fate would have it, they were tragically disappointed. Their child was born with a terrible deformity: her right arm was paralyzed, her little fist clenched horribly under her chin. They despaired for their dream of their child being the best pickpocket the world had ever seen. Nothing they could do would move the arm and, of course, they were afraid to hurt the fragile creature. They were, however, rich by now and were able to use their fortune to consult the best doctors in all of London and Europe. They traveled and hoped and prayed. They searched for the most skilled physicians in the world. But nothing that anyone could do made a difference. Until one day an old man showed up at their door. They hoped, and said that they would pay him whatever he asked. The old man sat before the child and observed quietly for a long while. Finally he took out a gold pocket watch and began to dangle it back and forth before the girl who watched the watch intently. Closer and closer the watch came, back and forth, back and forth. The girl’s eyes followed it back and forth, back and forth. Suddenly the girl’s paralyzed arm shot out and grabbed the watch. And dropped the gold ring that she had stolen from the finger of the midwife.

image: The British Library
Posted by Chris cavanagh at 10:42 am