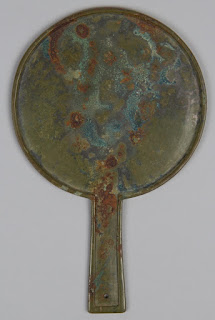 Once upon a time a young farmer was going to travel to the big city to buy some supplies. His father reminded him of the supplies they needed. His mother told him not to forget to be careful and watch out for thieves and avoid the taverns. His wife asked him to buy her a comb but, knowing her husband had to remember many things, pointed to the crescent moon and told him that looking at the moon in the sky would remind him of the comb she wanted. The farmer spent several days in the city to gather the supplies he needed and, finally ready to return home, found that he forgotten what his wife had asked for. Then he remembered to look at the moon which, by this time, was full and round, and he remembered that his wife had asked for something the shape of the moon. Entering the nearest shop he asked the shopkeeper for something round like the moon. The shopkeeper offered the farmer a mirror saying, “just as you requested, as round as the moon.” The farmer, never having seen a mirror, was very impressed and was certain that it would please his wife. When he presented his wife with the mirror she was disappointed that it was not the comb she had asked for. But, worse than that, when she looked into the mirror, she saw the face of a pretty young woman. She was shocked and outraged that her husband had returned from the city with another woman and she ran to her mother-in-law saying, your son has brought home a young woman from the city!” The mother-in-law looked into the mirror and said, “you are mistaken, it is not a young woman he has brought back but an old woman. What is he thinking bringing that old crone here?” The wife said, “she is no crone. She’s young and pretty.” The mother-in-law protested and put the mirror on the table while she and her daughter-in-law argued. The farmer’s son came into the kitchen and grabbed a rice cake to snack on and, seeing the mirror on the table, saw a young boy eating the very same rice cake. He shouted at the boy, “hey, don’t eat my rice cake! Give it back.” But the boy looked angry, kept the rice cake and seemed to be yelling back at the boy. The boy’s grandfather came into the room to see why his grandson was upset. His grandson cried, “grandfather, there’s a boy there who is stealing my rice cake.” The grandfather picked up the mirror and, seeing an old man staring back, was shocked to see that it was his own father returned from the grave.” He put the mirror down and bowed to the spirit of his father and asked forgiveness for his rudeness. The farmer entered the house to find his entire family crying and upset. “What has happened here?” he shouted. Everyone spoke at once. “Why have you brought home a young woman?” his mother shouted, “how dare you waste your money on that old hag!” His father looked stricken as he bowed low on the floor and his son was crying with a rice cake in his hand. His wife grabbed his hand and, holding the mirror in her other hand, dragged him to the local magistrate with the entire family following. The wife placed the mirror down in front of the magistrate and began to explain what had happened. The magsitrate picked up the mirror and was shocked to see a new government official in the robes of office and said, “finally, my replacement has shown up and I can leave this town.” He called to his servant to begin packing. Everyone reached for the mirror at once and it was knocked off the magistrate’s desk and smashed into a thousand pieces. Everyone was puzzled as to what had become of the person they had seen. “Good riddance,” said the wife.

I've told this Korean story many times in my son's primary school classes over the years and it always surprises me how funny he and his classmates find this silly tale. It reminds me that children still find enchanting things that, as adults, we take utterly for granted. Always eager to learn more about the stories I enjoy telling, I found a wonderful scholarly exploration of this tale that compares it to Chinese and Buddhist versions and discusses this tale as a form of social criticism: "They First Saw a Mirror": A Korean Folktale as a Form of Social Criticism by James Huntley Grayson (Journal of the Royal Asiatic Society, Third Series, Vol. 16, No. 3 (Nov., 2006), pp. 261-277). Stable URL: http://www.jstor.org/stable/25188647

As usual, stories are like onions with many layers that can be revealed.