Ahhh, the secret is in the grape 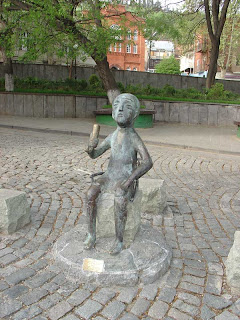 This little fellow is titled, according to the plaque, "Tamada" which is a type of host who is responsible for, amongst other things, making a series of toasts when revellers are about to imbibe . Georgia, i have learned is extremely proud of its wines (which, sadly, i still haven't tried). Apparently, wine has been made in this region going back several thousand years (7000 according to some). And this statue is a copy of a 7th Century BC find in western Georgia. He is holding a ram's horn which i'm sure many of you will recognize as a most ancient wine cup. According to one city guide booklet i have, many historians believe the word "wine" originated in Georgia. I'm for believing it.

This reminds me of a chapter from Eduardo Galeano's Book of Embraces:

On his deathbed, a man of the vineyards spoke into Marcela's ear. Before dying, he revealed his secret:

Marcela Pérez-Silva told me this, and I thought: If the grape is made of wine, then perhaps we are the words that tell who we are.

I found this text on the New Internationalist site where you can read more excerpts from Galeano.
Posted by Chris cavanagh at 12:32 am