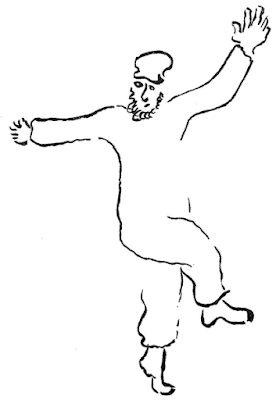 Word came to the Jews of a small Russian town that a much beloved and very wise rabbi was to pay them a visit. The village was off the beaten track and rarely had visitors of any kind. So excitement was high in anticipation of the visit of this well-known rabbi. The whole town prepared. The wise men and the talmudic students polished their questions. Foods were prepared for a feast.

On the day the rabbi was expected, people waited at the edge of the village watching the road. As soon as someone spotted the dust of an approaching cart, children ran out to greet it. And as the rabbi neared the village he was surrounded by more and more people. The rabbi and the growing crowd walked to the village centre. Now all the townspeople gathered. And some, noticing the large number of people, were so eager and worried that their questions might go unasked that they simply blurted them out. Very quickly there was a clamour of voices directed at the rabbi.

The rabbi raised a hand and many people fell silent. He held his hand steady and all listened. The breeze stirred the leaves of trees. Birds chirped in the warm sunlight. The rabbi began to hum a tune. He closed his eyes and swayed back and forth. First the children followed suit, humming the gentle melody and swaying on their feet. Now everyone was silent. And one after another the villagers joined the rabbi and children in humming and swaying. The rabbi picked up one foot and took a slow step, followed by another and another. Slowly he turned, still taking slow and measured steps. The children followed suit as did all the villagers. Then quicker and quicker the rabbi stepped and hopped until he was spinning around the square. The villagers all joined in until the square was a mass of dancing and spinning and singing people. The joy of the dance and the song reached out and touched the trees and the birds, the sunlight and the clouds in the sky. The entire earth seemed to be vibrating in time with the dancers.

Hours passed before the dance was done. One by one the villagers rested and when the last dancer was still and all sat in the square, tired and at peace, they looked to the rabbi who said, “I trust that I have answered all of your questions.”