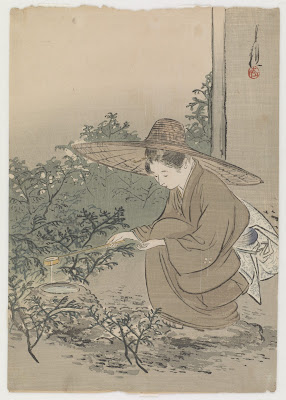 I have told this story for over 25 years, first learning it from Dan Yashinsky's The Storyteller at Fault, and later coming across many versions in zen literature. The first time I told this story was to a friend and two four-year old boys, one of them my friend's son. It was the only story that came to mind in a pinch and i wasn't at all sure it would hold the attention of two young rambunctious boys. But afterwards, my friend noted with astonishment how deeply the boys had paid attention. And i did feel that, indeed, despite my reservations, they really got the story well. And i wasn't sure at that time if i even got the story that well. But over the years this story has grown in import for me. I recall a story told of the founder of aikido Morihei Ueshiba who once faced an opponent who chose not to attack, for once he had seen the poise of the aikido master he realized that there was no possible entry for attack. The fight was won without a blow being made. Another story of the same master is about his reputed ability to dodge bullets. He once confronted a hunter famous for never missing his target and the two faced each other in a contest. But before the hunter could fire, the aikido master told the master hunter not to shoot for his bullet would, indeed, hit him. The aikido master had seen the perfect mastery of the hunter and knew that he could not win. I've often wondered if these sikido stories are about things that actually happened or if they are versions of the master of the tea ceremony story. Either way, the truth within this story endures.

Lately, i've been thinking of this story apropos of my many years struggle to teach people to facilitate meetings the way i do. There are many things i can tell people about how to facilitate, countless tricks of the trade as well as numerous conceptual frameworks. But i'm always left with feeling that there are only two things that matter - watching what i do (and being critical of it) and finding some way to be centred in themself - connecting with what is most true about themselves, with what they are most passionate about, with their uniqueness as well as their sense of connection with everything around them, and to channel that energy into what they do. Or, possibly, simply reflect on the story of the master of the tea ceremony.