Eduardo Galeano is a great hero of mine. I'll spare you my waxing on about his greatness and let you get to listening to him more quickly. Clara sent me this video of an interview done in the context of the current Spanish Revolution. While it is in Spanish, i do recommend that those of you who do not understand spanish nonetheless listen at least to the section of the interview in which Galeano recites, with piano accompaniment, a poem called The Right to Rave or El Derecho Al Delirio. You can follow along with the text below or read the english translation here. Galeano begins the poem at the 31:15 mark.

The following is my imperfect transcription - i apologize in advance for my errors:

Posted by Chris cavanagh at 9:35 pm No comments: 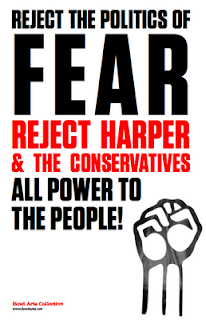 Should i be surprised that Harper's ghoulish implication that The Apocalypse would be hastened if he didn't get his majority so that he could "get on with the business" of managing the economy? Is it surprising that in our woeful political culture (and antiquated parliamentary system) that fear is more persuasive and powerful than hope? Our politics is the victim of religion. But i'm not talking about churches. Even though judeo-christian-islamic religions (and so many others) are robust, the most dominant religion in the world is economics. To be more specific: capitalist economics. For more than math and science (long-known to be a dubious claim), economics is first about values and ethics. And the idea that the invisible hand of the unfettered market (read: deregulated capitalist market) is the most effective way to organize an economy is a belief - a religious belief - for which the science is notoriously partisan and contradictory (not to mention arcane).

The religious belief that private, capitalist, profit-making is a natural way to conduct business is a big part of why we face the global environmental crisis that we do. And rather than turn away from this mad course (which included the greed-run-amok that precipitated the most recent global financial crisis) we accelerate: more exploitation of fossil fuels, getting "tougher" on crime, privatizing health care (or pursuing "alternative service delivery"), freeing private corporations of social responsibility and more. This is an economics of greed, fear and war. And, not surprisingly, it gives rise to crime, violence and an always growing machinery of policing and punishment.

But in the absence of a different kind of economics, one that inspires and gives hope to people, is it surprising that people take fearful shelter in what the dominant common sense assures them is completely natural: economic growth, business-as-usual, an elite of super-wealthy, a majority of I-wish-i-was-super-wealthy and always growing underclass of poor, homeless and starving? Oh, but they won't admit that it is fear that compels them. Many will assert bravado, will give voice to the ethics of individual initiative, entrepreneurship and free-market competition. And surely these attitudes, sincerely believed in, require more than fear as a motivation. Indeed, much of the common sense that makes up our lives steers people firmly into this ethical terrain. And it is one that is powerfully forgetful of history - for instance, that Canada remains the home of many indigenous nations with whom we have treaties and obligations.

But what is a different economic/ethical way of looking at the world? What different economics CAN we propose? Can we imagine an economics that is based on compassion, cooperation, collective action and well-being? And i would say, yes, it is already here. Look at the non-profit economy which is about 8% of the GDP. Cooperatives, barter (including the so-called grey market), gift exchange (which, notably, includes blood and organ donation), government supported social programs and even the black market are all economies that are different from the dominant for-profit economy. I would say there is a different economic ethics to be discussed. One that can inspire quite a different world. And this is a project to which i will devote much energy in the coming years.

But for now, the Conservatives have formed this unfortunate majority with barely 40% of the vote. 60% voted for something different. Add to this math that only 61.4% of eligible voters actually voted and this means that six million people (beating nine million) determine the fates of almost 34 million. And, to look even closer, given that Harper formed his minority in 2008 with 5.2 million votes this means that Harper's campaign pulled out only 800,000 new votes while all the other parties drew out only 400,000 new votes. So another way to look at all this is that 400,000 (about 1% of the population or 1.6% of electors) votes made the difference between the government we're now stuck with for at least four years and a government of the true majority. Our ridiculous system of first-past-the-post parliamentary ridings allows for a party who win a minority of votes to rule the majority. Our "majority" government was formed by less than 18% of the population. That's who the Conservatives represent. And it ain't me.

Posted by Chris cavanagh at 12:21 am No comments: