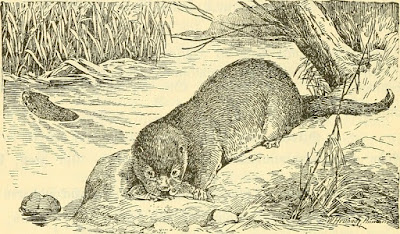 One day Otter, in tears, came to King Solomon: "My King, I have come for justice. This morning I asked Weasel to take care of my children while I went to the water to find food. When I returned, Weasel had killed my children." Solomon summoned Weasel and asked if what Otter had said was true." Weasel hung her head and said, "Yes, it is true. But I am not to blame for I was only responding to Woodpecker's striking of the War Drum and trampled Otter's children in my haste." Solomon summoned Woodpecker and asked if what Weasel had said was true. "Indeed, it is true that I signalled the call to war. But I did this as was expected of me when I witnessed Scorpion sharpening his dagger." Solomon summoned Scorpion and asked if what Woodpecker had said was true. "I admit that it is so," said Scorpion. "But I did this only upon seeing Tortoise don his armour."  Tortoise, when summoned said, "yes, but I acted only when I saw Crab draw his swords." Crab, in turn, said, "I acted only upon seeing Lobster draw his javelin." Lobster then said, "what choice had I when I saw Otter coming to eat my children?" Solomon turned to Otter and said, "Neither Weasel nor any others are guilty. You, Otter, are responsible for your children's death. Who sows death, reaps death."
Read more »
Posted by Chris cavanagh at 7:42 am No comments: