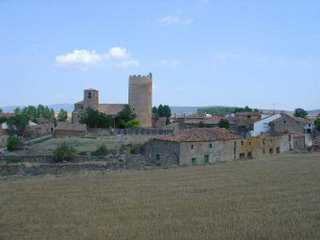 This ancient village of stone houses looks like it has grown straight out of the earth. There is an organic quality to the way the houses are arranged in the village – the streets are at strange angles widening and narrowing seemingly on a whim. The houses seem more collaged together than constructed. This village belongs to this landscape. Which reminds me of the word “human” which comes from “humus” which means “of the earth”. It is common to attribute such sentiments to Indigenous peoples around the world though the etymology of “human” does suggest that the sentiment also once existed importantly in Western culture. This also reminds me of a story of struggling for an image to use to represent aboriginal Canadians in the Ah Hah drawing workshop ( a method of popular education using drawing. A characteristic shape is used for people that looks something like the left hand image in the next post. It was agreed that this did not respect the differences between non-native and native Canadians. Someone proposed using this basic image with a feather added on top. But there was concern about the stereotyping that would likely result. So someone proposed the right hand image in the next post - where the line beneath the feet represented the earth and acknowledged that native people were identified by their relationship to the earth. I have always loved this simple and elegant expression of identity. And, while I believe that we are all connected to the earth, the populations of the dominant global culture (euro-america) are profoundly alienated from the earth – from all the rhythms of nature, the behaviour of weather, the cycle of the seasons and more. Native people, despite centuries of oppression, have sustained a connection with the land that remembers still that we come from the land. I came across a clever bumpersticker-worthy quote a while back: “Civilization exists by geological consent, subject to change without notice”. Indeed, we would do well to remember that volcanoes still explode, floodplains are not wise places for new suburbs, global warming is not a joke and when the rich monopolize all the safe places to live the poor will live wherever they can, including a mountain that will blow up or tumble down under heavy rain. Too many of us live against this world and not with it.
I am reminded that the word “humble” also comes from the ancient word for earth. I wonder if the common sense notion of humble as meaning “weak” or “lowly” comes from a misunderstanding of the origin of the word. For you could say that humble means “low to the earth” which conjures an image of weakness, subjugation, grovelling, if you assume the person is low to the earth because they are in front of someone with greater power than they. But, in this case, we could see them as not so much low to the earth as they are under the power of someone. If we just take the word humble to be about our relation with the earth, then being low to the earth could be a very good thing. In aikido (as well as numerous marshal arts, I am sure) , to lower one’s centre of gravity as much as you can is to be more and more stable. Humble reminds us that we are of the earth. And the earth is actually a very, very strong thing.

Posted by Chris cavanagh at 7:11 am