So, just what the heck was i doing in Georgia? 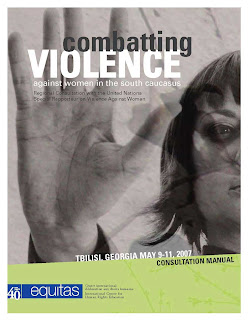 Now that i'm home i actually have time to think about the week i've just spent in Georgia. I came home to a week of catching up which has slowed down my blogging. So it goes.

The meeting, Combating Violence Against Women in the South Caucasus, was organized and facilitated by Equitas-International Centre for Human Rights Education, a human rights education organization based in Montreal who do an annual human rights training program (IHRTP) and who have excellent human rights educational materials. My role was primarily to support the lead facilitator, a highly skilled woman (Tanya) from Almaty, Kazakhstan (and alumnus of the IHRTP) and the Equitas programme officer. It was a rare opportunity for me simply to observe facilitation in action. And Tanya was great.

Now, for the most part, i remain quite ignorant about the region i was just visiting - the southern Caucasus, in this case referring to Georgia, Azerbaijan and Armenia. The meeting in Tbilisi involved representatives from a number of women's and human rights organizations who convened to share stories, explore common ground (for possible collaboration/coalition), and meet with and learn from the UN Special Rapporteur on Violence Against Women (so they could take better advantage of the support that the UN provides).

Given how little i know of the region it was hard for me to imagine what these womens groups had to contend with on a daily basis. One of the common issues frequently referred to was trafficking - not something we hear a lot about in Canada (though there was an interesting TV drama about it last year - i can't remember if it was CBC or CTV, but i found it compelling). Working in multiple languages (with Russian-English translation) and dealing with the post-Soviet realities of these relatively new states. One fascinating consequence of this post-Soviet time is that the commonality of russian language is lessening. Anyone over 30 speaks russian, but this is not the case for the under-30, many of whom are learning english. And the presence of english is everywhere in Tbilisi.

I was very impressed to meet Professor Yakin Ertürk, a Turkish sociologist at the Middle East Technical University in Ankara. Professor Ertürk told me of her recent report on the standard of due diligence in which she articulates a notion of "cultural negotiation" that i found quite compelling. In her report she writes:

At the community and family level, the human rights discourse needs to be complemented by an approach based on “cultural negotiation”. Such an approach complements the empowerment approach discussed above, in that it allows the root causes of violence to be confronted and raises awareness of the oppressive nature of certain practices pursued in the name of culture. This requires, (a) drawing on positive elements within culture to demystify the oppressive elements of culture-based discourses; (b) demonstrating that culture is not an immutable and homogenous entity; and (c) identifying and contesting the legitimacy of those who monopolize the right to speak on behalf of culture and religion. In this context, hegemonic interpretations of culture must be challenged by uncovering the power dynamics that underlie these. The process of cultural negotiation through campaigns, information and media can become an important counter-discourse for the transformation of discriminatory values, institutions and power structures.

We only had the briefest of conversations about this over dinner - but i am anxious to learn more about this notion which seems to hold much promise for our so so complicated post-colonial world where we seem to swing back and forth from western hegemony (as the new global common sense) to the cultural relativism of live-and-let-live which all too easily leads to fatal inaction.

The entire week spent in Tbilisi has left a strong impression on me and it has also left me with many thoughts to ponder.
Posted by Chris cavanagh at 6:28 am