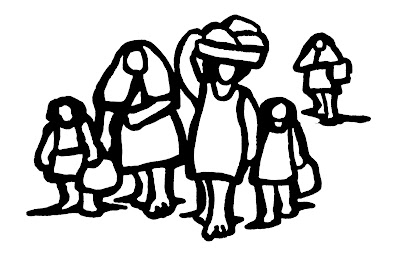 There's another story I tell about zen monks and carrying that carries a seemingly opposite message (about not carrying) but that i would say is complementary. What does it mean "to carry?" This story reminds me of another context for the use of carry (insofar as we say carrying a child to mean pregnancy) that can be found hidden in the word "difference" and the scottish word for children "bairn." The word "different" comes from “dis” meaning “not” and “ferre” meaning “to bear” as in “to bear a child.” Thus different, etymologically speaking, means "not to be able to bear a child." This sense of "to bear" survives in the Scottish word "bairn", i.e. to have been borne. I have often thought about how patriarchy and racism have constructed "normal" as male (and white, amongst other things), while female (and black, brown, etc.) are “different.” But hidden in the history of this word is the notion that “woman” is the baseline and those who do not bear children are the ones who depart from that baseline – who are different. Thus when i hear the old woman say, "to have nothing to carry," i hear many meanings, resonances within resonances.