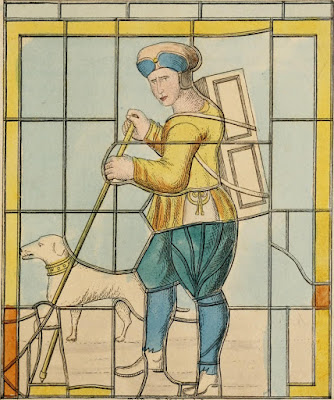 Hundreds of years ago in Swaffham in Norfolk, England, there lived a poor pedlar by the name of John Chapman. He worked hard to sell his wares and was always about with a pack on his back and his dog at his heels. One night he had the most peculiar dream. In the dream he stood beside London Bridge and a voice said that if he did this he would hear good news. He ignored the dream as nothing but a passing fancy. But when the dream repeated the next night and the next night after that, he resolved to make the trip to London town.

He found London Bridge easy enough as well as the place he had been standing in his dream. He took up the station with his dog ever-so-faithfully beside him. But by the end of that first day, though he had heard many things from the passers-by, nothing sounded like the good news prophesied by his dream. And the second day was much the same. Now, on the third day, just as he was contemplating his journey home, a shopkeeper came over to speak with the pedlar. “Good fellow, though I am not sure you aren’t a fool, I’ve watched you from my hat shop for three days. You sell nothing, you beg for nothing. What are you doing here?”

“To tell you the truth, I have come here because of a dream in which I stood by London Bridge and heard good news,” the pedlar explained.

“Then you are, indeed, the fool I took you for. Why I had a dream three nights running, in which I stood in an orchard behind the house of a pedlar who lives in Swaffham, a place, I daresay, I’ve never heard of and probably doesn’t exist. In my dream I stood beside an old oak tree and thought that if I digged I should find a treasure. Anyone can dream of treasure. And fancy me travelling to a place I’ve never heard of for a dream of a treasure beneath a tree? What a fool I would be! And I would deserve it if I should lose my hat shop. Take my advice and be off with you, go home, mind your own business.”

The pedlar thanked the shopkeeper for his advice and made his way home. He digged beneath the old oak tree and found a large box with an inscription carved into the lid that he could not read. The box was filled with treasure. He placed the lid with its inscription in his window and after some time some school children came by who could read Latin and they said, “look, that writing says,

Under me doth lie
Another much richer than I”

The pedlar, hearing this, dug more deeply beneath his old oak tree and found a treasure much greater than the first. Thus made rich, he hired men to repair Swaffham church. And today in Swaffham you can see statues and images in windows and on signs of the pedlar and his faithful dog.

I first came across this story in Joseph Jacob's More English Fairy Tales, a book i learned about from Joan Bodger, my first ever storytelling teacher. This was the first book from which i formally learned stories to tell and after which i dared to call myself a storyteller. I remain especially fond of several stories in this collection, Tamlane, The Buried Moon, Tattercoats, and several others and, of course, The Pedlar of Swaffham. But it was only when i heard my friend Alec Gelcer tell a version of this story that it lodged in my heart. Alec, who died many years ago now and whose voice is still sorely missed, told a version about a poor jew in a polish town who, in standing beside the bridge of his dream, is mocked by a soldier who notices the man and, of course, tells him of his own foolish dream. I can still hear and feel the derision with which Alec imbued the soldier. Though i forget most of the details, Alec's version remains my favourite. The tale, in the Aarne-Thompson-Uther classification system, is type 1645 "The Man Who Became Rich Through a Dream," and of which there are numerous versions around the world. Many years after learning this story, i read Paulo Coehlo's The Alchemist. I enjoyed this novel immensely and recall the pleasant shock of recognition as i realized, only towards the end of the novel, that it was a retelling of this ancient tale.

image: from "The history and antiquities of the parish of Lambeth, and the archiepiscopal palace .." (1827)
Posted by Chris cavanagh at 9:00 am