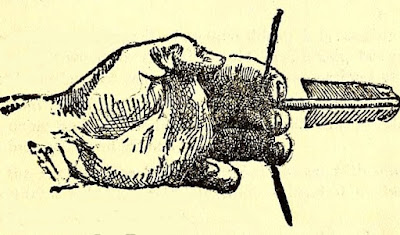 Nasruddin’s students were gathered to watch their teacher compete in an archery contest. Nasruddin, assuming a soldier’s stance, aimed and fired and missed the target entirely. The crowd roared with laughter and the students watched to see what their teacher would do next. Nasruddin held his bow shakily, nocked his arrow and let fly a shot that barely made it halfway to the target. The crowd laughed harder than before. Nasruddin looked at the crowd, looked at his students, then quickly turned to face the target and had let loose a shot before anyone knew it. The arrow landed with a thud in the bullseye. It was a perfect shot. The crowd, ready to laugh a third time, had to choke their laughter and a stunned silence fell over the assembled. Nasruddin grabbed his prize and strolled away from the crowd. The astonished students and the silenced crowd demanded an explanation. Nasruddin paused, turned, and faced everyone and said, “Well, for the first shot, I took the stance of a soldier who was face-to-face with an enemy. Fear made the shot go astray. For the second shot, I was like the man who, having failed, was timid, anxious, and so eager to please that he cannot concentrate. The shot had no power.” “And the third shot?” asked a voice from the crowd. “Who shot that one?” “The third shot?” said Nasruddin, “ That was me!”
Posted by Chris cavanagh at 12:49 pm