The Fox and the Raven 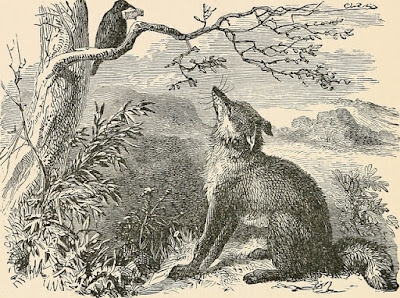 A raven seized a piece of cheese and flew onto a tree branch when a fox came along. The fox, looking up at the raven, said, “such a beautiful black sheen to your feathers, my friend raven. They glisten midnight blue at the right angle to the sun. Why, your plumage is that of a king of birds. I am sure you have a voice to match it. Would that I could hear such a voice and then I would surely know that you are, indeed, a king amongst birds. I would proclaim this to all I met.” At that that raven let out a loud squawk and promptly dropped the cheese. The fox grabbed the cheese and, walking away, said, “You have quite the voice, my friend. Too bad you haven’t the brains to go with it.”

A well-worn fable from Aesop's Fables. Ive been revisiting many of these stories which i find i take far too much for granted. I think our familiarity with such stories tends to let us think we've "gotten the message" and, having done so, the story loses any novelty and appeal. But i think it is a mistake to allow ourselves to overlook these stories. They are, after all, thousands of years old, perhaps much older than we tend to think given that we often point to a date of publication as the origin of such tales. However, these tales no doubt preceded publication by a considerable amount of time - existing within oral tradition, certainly for many generations and possibly for millennia. I've read scholarship about Aesop for some time and have seen it suggested that Aesop, often described as an ugly Greek slave, was actually from Ethiopia which suggests an African origin to the tales. Across the India Ocean in those long ago days there was another collection of animal tales assembled for the purposes of instruction:  The Panchatantra (attributed to Indian scholar Vishnu Sharma, 300 BCE). These collections share some stories in common which implies that the trans-Indian Ocean-Mesopotamian traffic of the ancient world was a transmission route not only for goods but, as is the way of human culture, stories as well.

Thinking of this story in today's context i am reminded of a friend's advice about receiving complements and insults. My friend is an in-demand public speaker and is certainly one of the best i have ever seen. Her talks draw a great deal of praise and also, as is the case with public figures who speak their mind, scorn. My friend says that it is important to let neither praise nor scorn sway you. She says that she's learned that if you let yourself be pumped up by the praise it makes you more vulnerable to be hurt by the scorn. And i appreciate this reminder of how such scorn can be the flip-side of flattery. Which also reminds me of a story from Aikido, a martial art that puts great emphasis on staying "centred" and balanced. Terry Dobson, a great aikido teacher who passed away some time ago, describes one of the most difficult lessons he had to endure in learning aikido. It began with him being surrounded by other students for a round of randori in which several people attack one person. However the style of attack was verbal and students hurled insults at Terry. He found it easy to remain calm and centred. Then the "attack" changed to a round of praise and expressions of love and respect. Dobson was reduced to tears within seconds. When i combine my friend's advice and Dobson's story and this fable from Aesop, i see a wonderful dialogue about the ethics of communication and interconnection. I wonder about the ancient dialogues from which such stories as Aesop's Fables come down to us. And again, i question just how "advanced" we think our oh-so-modern world to be. When we look at the ancient collections of tales and texts such as the Rig Veda and how they continue hold relevance and powerful meaning for us today, i'm not sure we've "advanced" at all.